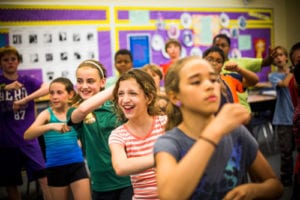 The Let’s Move! Active Schools National Award is the top physical activity and physical education distinction for K-12 schools. The award celebrates a school’s commitment to integrating at least 60 minutes of physical activity before, during and after the school day.

“These schools are raising the bar by creating Active School environments where students are happier, healthier, and higher-performing.  I am thrilled with their success through Let’s Move! Active Schools – they’re helping to create a new norm where physical activity is a fundamental aspect of a young person’s success both in the classroom and in life,” said First Lady Michelle Obama.

Studies show that Active Kids Do Better. Physical activity not only helps kids stay healthy and strong, but it can also lead to higher test scores, improved attendance, better behavior in class, and enhanced leadership and interpersonal skills.

The Let’s Move! Active Schools collaborative works together to transform the physical activity and physical education culture in America’s schools. By streamlining the selection of programs, resources, professional development and funding opportunities and delivering each school a customized Action Plan, Let’s Move! Active Schools results in children moving for the nationally recommended 60 minutes a day.

Honorees are provided with a banner, certificate and congratulatory letter from the First Lady. Recognition packages were generously sponsored by BOKS, Build Our Kids’ Success, a free before- and during-school physical activity program aimed at getting kids’ bodies moving and their brains ready to learn.